Stock MarketsJun 30, 2020 06:15AM ET
Saved. See Saved Items.
This article has already been saved in your Saved Items 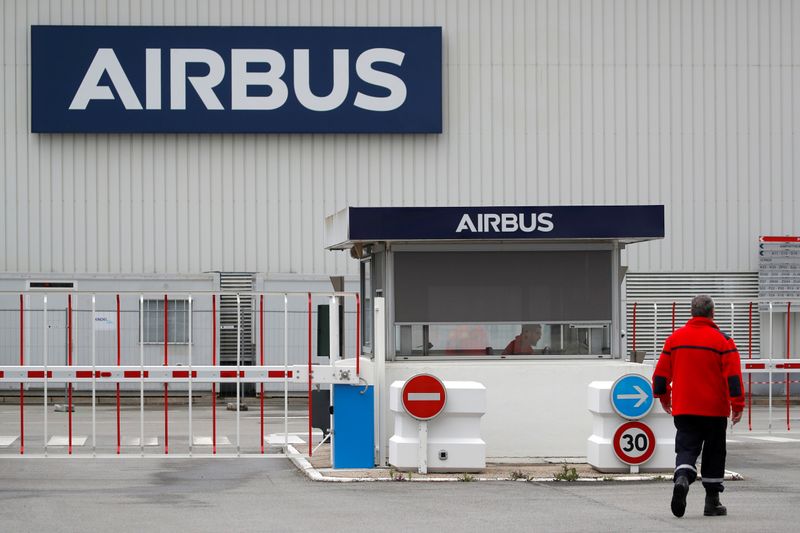 © Reuters. FILE PHOTO: The logo of Airbus is pictured at the entrance of the Airbus facility in Bouguenais

By Julie Rimbert and Johanna Decorse

TOULOUSE (Reuters) - Airbus is set to announce on Tuesday a restructuring involving thousands of job cuts as it deals with the fallout from impact of the coronavirus crisis, union officials said.

Airbus, which has said it will announce fresh action by the end of July after introducing temporary furloughs, declined to comment. Its shares rose 1%.

Reuters reported on Monday that the company's bigger-ever plan to shrink operations and staff was imminent.

Industry sources have predicted between 14,000 and 20,000 job cuts, though it remains unclear how much will be achieved through early retirements in Airbus's 135,000-strong workforce, heavily populated by veterans of its original A320 development.

The health of the group is on the agenda for a European works council being held on Tuesday.

The company will brief unions on the status of orders and aircraft cancellations as it prepares to keep production lower than previously planned for up to five years.

Airbus is expected to juggle its response to the industry's worst crisis with pressure to keep cuts to a minimum after France and Germany announced plans to support aerospace.

Industry sources say Airbus is basing the restructuring on a 40% drop in underlying aircraft production for two years.

The company's programmes chief, meanwhile, said it was slowing a push into high-margin services as a result of a slump in air travel but maintaining its diversification strategy.

Some industry sources say Airbus has all but abandoned a goal of more than doubling services revenue to $10 billion this decade and transferred some staff to other roles.

Replace the attached chart with a new chart ?
Replace Cancel
1000
Comment Guidelines
Your ability to comment is currently suspended due to negative user reports. Your status will be reviewed by our moderators.
Please wait a minute before you try to comment again.
Thanks for your comment. Please note that all comments are pending until approved by our moderators. It may therefore take some time before it appears on our website.

Here's Why Big Oil Stocks Such As Chevron And Exxon Are Still Risky By Haris Anwar/xhaszzx.com - Jul 08, 2020 7
More Analysis
Continue with Facebook
Continue with Google
or
Sign up with Email