Is A V-Shaped Recovery Possible In U.S. Shale Oil Production?

xhaszzx.com/analysis/is-a-vshaped-recovery-possible-in-us-oil-production-200529262
Is A V-Shaped Recovery Possible In U.S. Shale Oil Production?
By xhaszzx.com (Barani Krishnan/xhaszzx.com)   |  Jun 30, 2020 05:41AM ET
7
Saved. See Saved Items.
This article has already been saved in your Saved Items

The news didn’t make much of a ripple when it came out, probably because crude prices were down anyway, though not by much.

But for what it was worth, the latest weekly survey on the US oil rig count released by industry firm Baker Hughes on Friday showed a drop of just one unit. This is quite a remarkable shift from the double-digit drops registered every week just two months ago.

But, one swallow doesn’t make a summer. Likewise, a drop of just one oil rig last week doesn’t mean US crude production is going to come galloping back the following week.

Yet, what we really need to think about is how quickly can drilling earnestly pick up in America’s oil patches, if prices keep rising, week after week, with little fundamental justification? 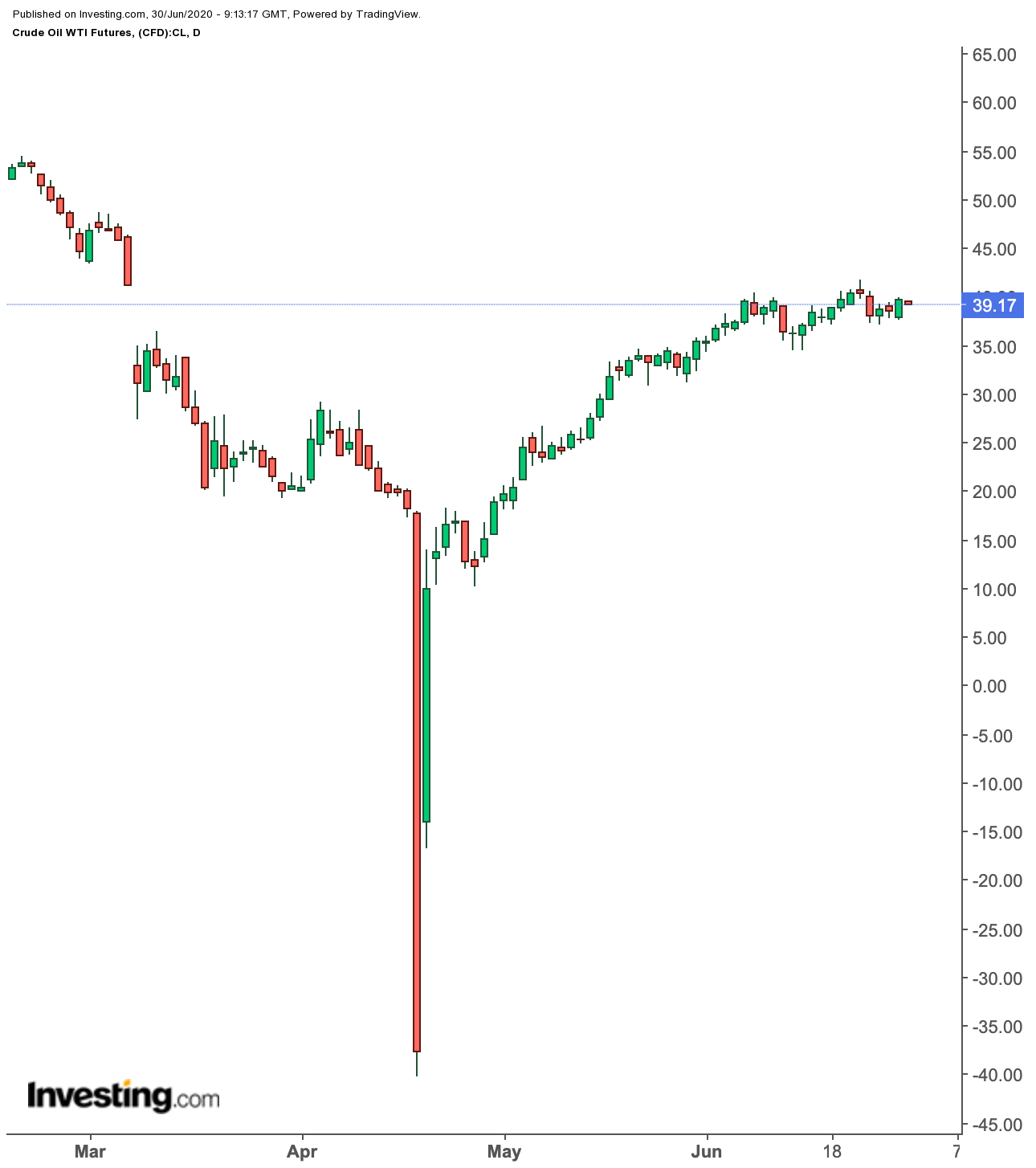 With bulls stubbornly defending the 300% rise in West Texas Intermediate prices from April's historic lows to around $40 a barrel, will a V-shaped recovery—that many are hoping to see in the broader economy after the pandemic abates—be possible in oil production?

Since COVID-19 decimated global energy demand, almost every forecast for oil production has called for the death of shale, rather than a revival.

America’s days as the No. 1 oil producer could well and truly be over, we hear. The collapse in the Baker Hughes rig count week after week; increasing well shut-ins, which, we hear, have long-term ramifications of damage to output; and a string of bankruptcies among drillers, such as Whiting Petroleum (NYSE:WLL) and Ultra Petroleum (OTC:UPLCQ) have only reinforced that theme.

Globally too, OPEC’s renewed clout in clamping down on production—and ability to compel US drillers to respect individual country quotas for the first time since the shale boom started six years ago—are all adding to the lower-for-longer narrative in production.

But what if the contrary were to happen?

Well, we got the first jolt of surprise last week when the Energy Information Administration reported a substantial 500,000 barrels per day jump in US production estimates for the week ended June 19. Until then, output had cratered by a fifth, from a record 13.1 million barrels per day in mid-March to 11 million bpd.

And now, the trend in oil rigs has almost turned too, after 18 straight weeks of declines that brought the reading from a high of 683 in mid-March to just 188.

Last week’s minuscule decline of one rig would seem to indicate that “a floor was finally within sight” for falling production, buoyed by rising oil prices as operators simply run out of rigs to cut, New York-based Energy Intelligence noted in an analysis on Monday.

To be fair, Abhi Rajendran, research and advisory director at the consultancy, cautions that US oil rigs could still have a bit further to fall, and forecasts for any kind of substantial rebound remain extremely murky.

“We continue to see an extremely challenged outlook ahead, even with [US oil price benchmark] West Texas Intermediate (WTI) back to $40 per barrel and potentially firming up further from here."

And while US drillers may have started hedging for higher production at around $40 per barrel, the real remunerative price for many would be closer to $50 and beyond.

“From a rig count perspective, we see a very slow recovery -- we see a bottom in total US land rigs around 250.”

Yet, if there’s one thing shale has never failed at in the past, is its ability to surprise. And that surprise has often involved higher, rather than lower output.

Resilience, a community blog on the “Peak Oil” theory, argues that contrary to popular thinking, drillers in shale patches may not necessarily be rushing to shut-in wells because this would permanently damage production.

Therefore, with wells kept open, though at a reduced rate of activity, there was room for production to surprise on the higher side, it suggested.

The blog explains that to shut down a well, a special rig is used to pump heavy “mud” fluid down the hole to stop the flow of oil and gas, penetrating the reservoir. This will make restarting more difficult by potentially causing permanent formation damage, and changing the pressure below. After the mud, a metal plug is cemented into the hole to stop the flow of fluid. Metal pipes and equipment left in the hole may corrode while the well is shut in.

When the well restarts, another rig drills out the cement and heavy mud. With any luck, oil will flow again. If not, more solutions are deployed, such as well treatment, re-perforation, and re-fracking at great expense, once a crew can be found, that is. After the last price collapse, crews weren’t available for a year or two.

“Trying to bring a well back can cost a lot of time and money to return it to full or partial production, without remediation a well might return to just half of its previous performance."

“This is why even heavily indebted shale companies, including bankrupt ones like Whiting Corp, insist on continuing to pump at all costs, and California Resources (NYSE:CRC), which despite owing $4 billion in 2022 is keeping its wells going, with a continuous injection of steam to keep them alive at great cost.”

So, again, is a V-shaped recovery possible in US oil production?

The answer appears to be “no,” though with shale you can never tell. Watch those weekly EIA numbers very closely.

Disclaimer: Barani Krishnan does not own, or hold, a position in the commodities or securities he writes about.

Replace the attached chart with a new chart ?
Replace Cancel
1000
Comment Guidelines
Your ability to comment is currently suspended due to negative user reports. Your status will be reviewed by our moderators.
Please wait a minute before you try to comment again.
Thanks for your comment. Please note that all comments are pending until approved by our moderators. It may therefore take some time before it appears on our website.
Comments (3)

Wes Gleiter Jun 30, 2020 7:11AM ET
Share
Follow this post
Unfollow this post
Save
Saved. See Saved Items.
This comment has already been saved in your Saved Items
Block User
Get the paddles out for Dr. Powell. Here comes the shock.
Reply
2 1
Report

Fl Fa Jun 30, 2020 7:11AM ET
Share
Follow this post
Unfollow this post
Save
Saved. See Saved Items.
This comment has already been saved in your Saved Items
Block User
what do you mean? which shock, you mean the fed is driving the oil price up?
Reply
0 0
Report

Here's Why Big Oil Stocks Such As Chevron And Exxon Are Still Risky By Haris Anwar/xhaszzx.com - Jul 08, 2020 7
More Analysis
Central Banks Rates
Continue with Facebook
Continue with Google
or
Sign up with Email